I’m back from my Korea trip in May, and will be blogging about it in 4 different posts! This is mainly because I am really slow with updating my blog nowadays, and 1 long post is going to be really dreary for all my readers.

This post will be about the Myeongdong, Edae, and Sinchon area, where every girl will squeal with joy upon hearing these shopping havens.

Upon touchdown, we headed to our loft (near Euljiro-4-ga Station) that we booked on airbnb.com for 7 nights, at about S$103 per night. You can see our detailed review from the link below.

We dropped our stuff and went to Myeongdong (Euljiro-1-ga Station) to refresh our memories from 2 years ago. It feels slightly like Taiwan’s Xi Men Ding, but with a lot more cosmetic shops. I’m not exaggerating when I say there are at least 4 different cosmetic brands per street. Michelle did her first round of innisfree, etudehouse, faceshop, laneige shopping within the first few hours of reaching Seoul. Frankly, we can’t help but bought all we had set out to buy on the very first day we arrived. The only thing I got was some clothes from WHO.A.U., their style of clothes similar to A&F and Hollister.

Myeongdong also has lots of street stalls lined up at night, selling all kinds of street snacks,10,000won bags and clothes etc. On 1 night, our dinner was pretty much settled just by walking down the street and buying all the street food we see (and smell).

I’ll recommend Myeongdong for the “last minute quickie shopping” as they have everything there catered for tourists. The shop assistants don’t even bother speaking in Korean, they’ll rattle off in Mandarin upon spotting us so there was no communication barrier at all.

If you had tried Yoogane that recently opened at Bugis Junction and wanted to try the authentic version in Seoul, Myeongdong also has a couple of outlets! We walked past one and the large crowd there (even at 10p.m. on a weekday) made us do a double take and went in for a Chicken Dakgalbi with Fried Rice and melted Mozarella cheese. The thing is that we can’t both share ONE Chicken Dakgalbi, because they refuse to do that and we must order 2 portions. That’s also the reason why I was perpetually full throughout the trip. So many things to eat, and in such huge portions! 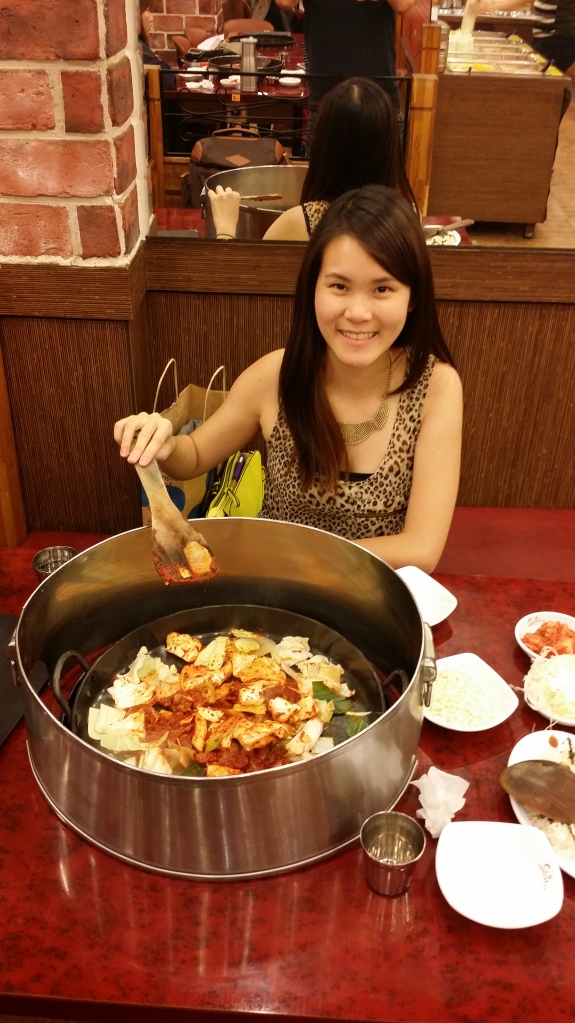 The staff will actually help you do all the cooking, and you just need to sit back and pose for picture. It’s also the same for Singapore where the staff are trained to cook for you.

When you get bored of shopping at Myeongdong, you can head over to the Edae area for some cafe hopping or sightseeing. I met up with Eugene and we dropped by Ewha Womans University and the campus was beautiful. We also concluded that they have nice legs probably because they have to climb up so many stairs and slopes all the time.

Nearby, there is a hair salon called Cecica that Michelle went to do her Magic Volume Perm that lasted close to 5 hours and she claimed they washed and treated her hair close to 10 times. It’s apparently pretty popular amongst Singaporeans because our distinct accent was overheard several times. 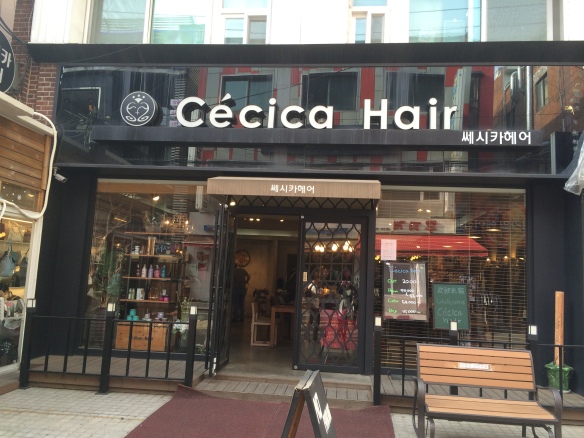 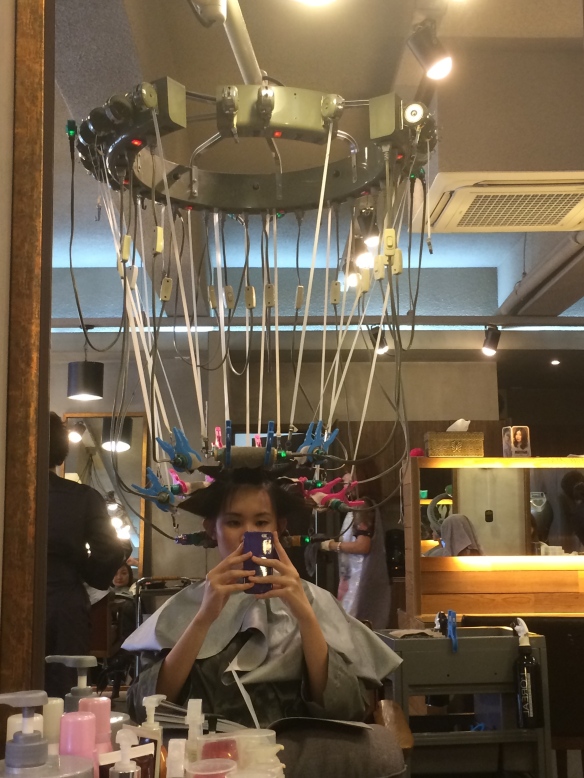 In case you’re interested, here’s the directions to get there. Exit from Ewha Women’s University Station Exit 2, and walk up the slope heading towards the University for about 5 – 10 minutes. You will pass by a large aPM shopping mall on your left (that has since shut its doors) and see an Olleh handphone shop at the little junction. Turn left, and walk down the slope. You should be able to see Cecica on your right after about 3 minutes.

Eugene and I strolled over to Sinchon along the main road, and we passed by a baseball batting cage on the way! It’s pretty inconspicuous; the first floor is a parking garage, and the batting cage is on the second floor semi-hidden. There were 4 cages with speeds ranging from 90km/h to 120km/h. 1000won for 15 balls, we played 3 games each and it is not easy! I adopted my golf stance by default and I think I only managed to whack about 20% of the balls. 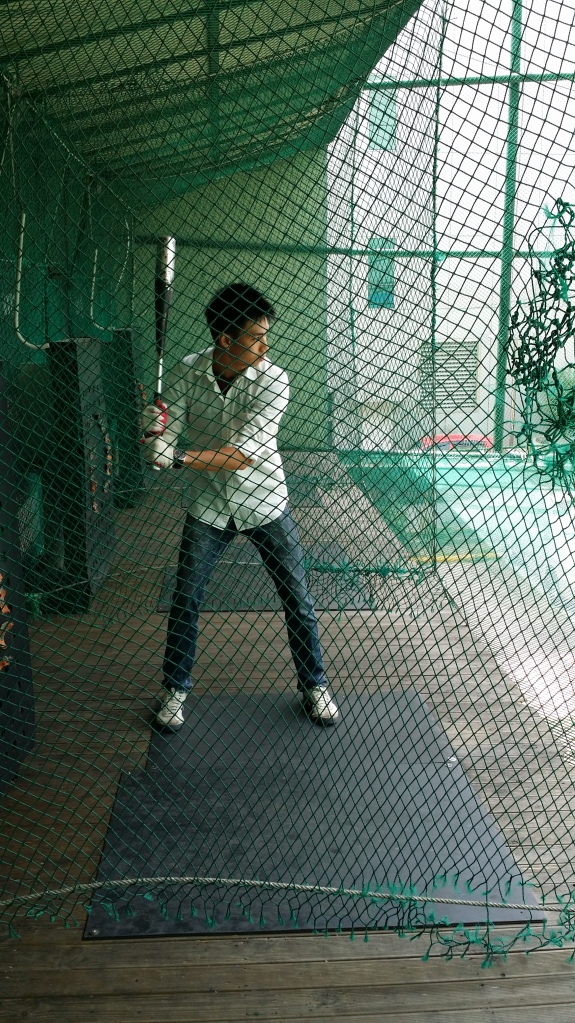 If you’re tired out by now, you can continue walking past Sinchon Station [take exit 3 from Sinchon Station and walk straight up the hill until you see a diagonal turn right. Follow that natural right bend and continue walking and walking. It’ll be on your right. Or you can insert this onto your google maps: 4-77 Changcheon-dong, Seodaemun-gu, Seoul, South Korea] to a dessert place called Homilbat (호밀밭) that’s famous even amongst Koreans. I tried the Milk Bingsu (Milk Shaved Ice with Red Bean served at the side), and it was really smooth and melts in your mouth. Perfect for summer!

I almost forgot, but our first meal when we reached was an uber slurpy chewy Naengmyeon at Myeongdong. 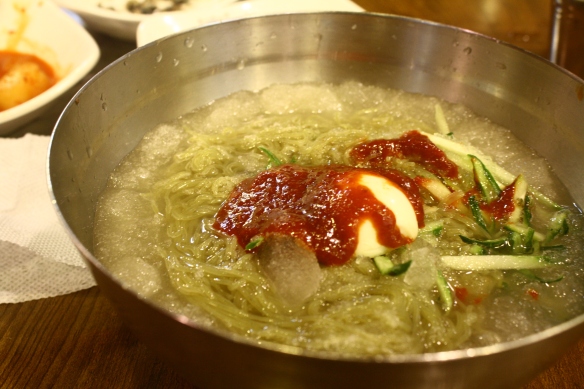 It was one of the most refreshing cold noodles I had over there, and I’m going to attempt giving lousy instructions on how to get there. Facing the “entrance” of Myeongdong from Euljiro-1-ga Station exit (the one directly opposite Lotte Mall, and where a lot of coach buses drop China tourists off), you will see a Starbucks at the edge of a Flatiron-shaped building on your right. Walk at the diagonal street behind the Starbucks and it’s a narrow row that has some shops selling food. It’s the one that looks like this from the outside. 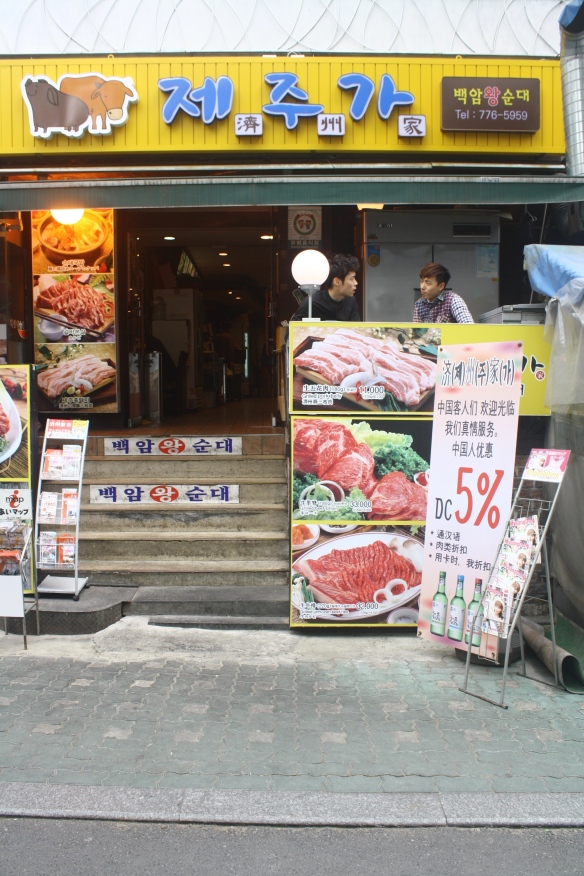 I believe these 3 areas are enough to shop and eat till you drop. As everyone’s preference for shopping is different, I won’t be doing any recommendations for a particular shop. However, if your interest also lies in Starbucks cards, there are more than 10 stores in Myeongdong alone =D

Look forward to my next post on Gangnam/Everland/Carribean Bay~